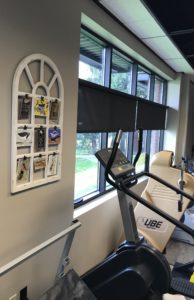 Get steadier on your feet!

Balance is defined as the ability to maintain one’s center of mass over their base of support. It may sound simple, but is actually a very complex task, relying on 3 systems including the visual, vestibular, and somatosensory. Our therapists are here to help you tease out the components of balance and dizziness and back onto your own two – steadier – feet.

Visual information allows upright orientation based upon knowledge of objects in the world around you – both vertical and horizontal. Most people rely heavily on the visual system; if you feel off-balance walking to the bathroom in the dark, this is you in a nutshell.

The somatosensory system pulls in your body’s sensation of weight, pressure, and the status of joints to relayinformation about upright positioning.

If sensation is lost in the feet, for example, the brain does not receive cues about contact with the ground. This disorder, called peripheral neuropathy, is common among people living with diabetes, but can also occur as a result of other injuries.

The final pieces of information are provided by the vestibular system, utilizing fluid filled organs in the ears to transmit information regarding the movement and position of the head to structures in the brain. Because it works in conjunction with visual reflexes, difficulties in this system can lead to vertigo, or the sensation that the world is spinning. Vestibular disorders can occur after head or neck injuries like whiplash, after ear infections, or as part of the aging process.

Fast facts about balance and dizziness: